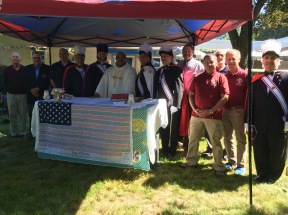 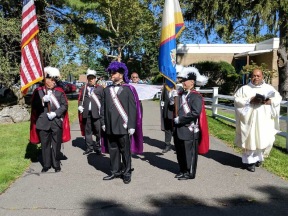 In a solemn outdoor ceremony held on Saturday morning, September 9th on the beautiful grounds of Notre Dame Health & Rehabilitation Center in Norwalk, members of Knights of Columbus Bishop Fenwick 4th Degree Assembly (including members of Council 14360-Norwalk) were joined by their families as well as residents and staff of Notre Dame at a special Mass in remembrance of those who lost their lives sixteen years ago on September 11, 2001.

“It is nice to take time to honor those we lost on that day,” said George Ribellino, Faithful Navigator of Assembly 100. “This is the 3rd year of having the Memorial Mass and picnic with the residents of Notre Dame and we are so appreciative of the hospitality of Sister Lucie and the staff of Notre Dame,”  Ribellino went on to say.

On a bright sunny morning, residents and patients Notre Dame, along with staff, volunteers, a Knights Color Guard formed a procession across the Notre Dame grounds to the flag pole for the blessing of a brand new American Flag donated by Assembly 100.

Father Reggie Norman, Pastor of Our Lady of Fatima parish (Wilton) and Chaplain of Knights of Columbus Assembly 100, was the celebrant of the Mass.  Special American flags bearing the names of 9/11 victims were part of the ceremony as well.

Father Reggie in his homily about the 9-11 Anniversary said, “9/11 is a day to remember: remember who we are and what we are about. It was not a time of selfishness but a time of togetherness. Let us return to the time where we work and pray for each other.

The Mass was coordinated by Notre Dame’s Sister Lucie Monast, SSTV, with assistance from Assembly 100 and members of Catholic Daughters, Court St. Matthew #2640. Following the Mass, a special picnic was held for all attendees in which the Knights helped serve

“It was truly a special and memorable morning for all”, said Sister Lucie Monast

Notre Dame Health and Rehabilitation Center is a 60-bed residence, including 6 private rooms, and located on five landscaped acres in Norwalk, CT, is operated under the loving sponsorship of The Sisters of Saint Thomas of Villanova. Their goal is to optimize the quality of life for the chronically ill and convalescent elderly.  Notre Dame has been awarded 5 stars, the highest ranking from the Center for Medicare and Medicaid Services. It has been named by US News & World Report as one of the Best Nursing Homes in CT.   For more information go to ndhrehab.org.

Knights of Columbus Bishop Fenwick Assembly 100 was chartered in Norwalk, CT since 1914.  The Fourth Degree is the outgrowth and culmination of the desire of the Members to manifest their love for country and pride in their Catholic American heritage. In 1882, the Reverend Michael J. McGivney had founded the Knights of Columbus to provide mutual aid and assistance to its members and their families. At that time the Order had only three Degrees exemplifying the principles of Charity, Unity and Fraternity. In compliance with the wishes of the body as a whole, the national board of directors met in August 1899 and approved the addition of a Fourth Degree to the work of the Knights of Columbus. The new ritual was adopted on the 9th of December and went into effect in 1900 with its primary purpose to foster the spirit of patriotism through the demonstration of one’s love for its country and by responsible citizenship. It is the highest Degree in the Knights of Columbus, giving a greater knowledge and appreciation for our Catholic heritage.  For more information, go to Assembly100.org.