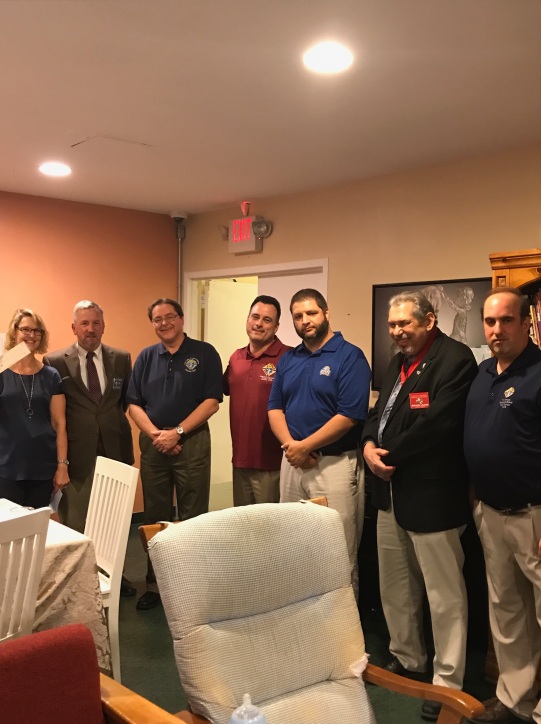 Two Fairfield County Knights of Columbus Councils partnered for a 2nd year to hold a Golf Tournament for Charity called the Sword & Shield Golf Classic.  Under the leadership of Co-Chairs George Ribellino of Norwalk Council 14360 from St. Matthew and Greg Matera of Fairfield Council 11077 from Our Lady of Assumption, the golf tournament was a rousing success for a 2nd year raising funds for several organizations including Good Counsel Malta House of CT –which is a home to feed and shelter women from all backgrounds eager to keep their unborn children.

On September 13th, members of both councils arrived at Malta House joining the residents and Board for  Mass and Dinner before presenting checks totaling $2000 from a portion of the proceeds from the late spring outing.  “To be able to do good for those in your community gives such a level of satisfaction, it really can’t be described,” said Golf Finance Chair and current Deputy Grand Knight from Council 14360, Anthony Armentano while attending this Donation Ceremony.  Armentano went on to say that “Malta House does so much good and we are honored to help where we can.   Co-Chair Matera echoed Armentano’s sentiment, “We are proud that the Knights of Columbus is able to support the needs of Malta house and their residents.”

Both Knights councils have worked with Malta House over the years by providing diapers, wipes, formula and supplying man hours to paint and make repairs at the house.  “I have worked with Malta House since joining my Knight council in 2009.  I admire the work that the staff and board do to help the mothers and children at Malta House.  We were so honored to present a check from the proceeds of the golf tournament to Good Counsel Malta House of CT,” said Tournament Co-Chair George Ribellino, Jr.

“Malta House is so very blessed to have the support of the Knights of Columbus Council 14360 in Norwalk and Council 11077 in Fairfield.  Not only do the Knights raise funds that allow us to provide a safe home and support services to young women and babies who have nowhere else to turn, they also work behind the scenes with the upkeep of our home.   We look forward to participating in next year’s Sword & Shield Golf Classic,” said Kim Petrone, Chair of Malta House.

The vision for Malta House came almost 20 years ago when a young father learned that there was “no room at the inn” for many pregnant women in Fairfield County, who chose life for their unborn. These vulnerable young families often found themselves living on the street or in sub-standard conditions.

It was just announced this week that Malta House formed a collaboration with Good Counsel which runs maternity homes in the tri-state area and beyond.  “Linked with Good Counsel’s network and resources, we’ll be able to provide even greater access to health services, education, job skills and more for expectant and parenting mothers,” Petrone said. “Good Counsel also has the ability to provide care for women with substance abuse and mental health disorders, ensuring that no woman who seeks our help will ever have to be turned away. This capability is a win-win for Connecticut and our home in support of human dignity and family stability.”

The Third Annual Sword & Shield Charity Golf Classic will be held on June 11, 2018 at Brownson Country Club in Shelton, CT.  Details will follow at saintmatthewknights.com.

Founded in 1882 by Father McGivney in New Haven, Conn., the Knights of Columbus has grown to nearly 2 million members with charity as its primary mission. Last year, Knights donated $177.5 million and more than 75 million hours of service to charitable causes.