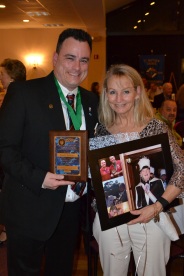 On Saturday, October 22, 2016, the Knights of Columbus St. Matthew Council 14360 held its 5th Annual Columbus Day Macaroni Dinner in St. Matthew Parish’s Masterpool Great Room. Over 180 friends and family enjoyed a fine Italian meal to honor those recognized for their accomplishments during the past 2015-2016 fraternal year.

Among those honored were Deputy Grand Knight Anthony Armentano with the Council Knight of the Year Award, the Cossuto Family for Council Family of the Year, and the Mitchell Family for Parish Family of the Year.  “Brother Anthony was a big part of helping me run the council and I appreciate all he has done.  The Cossuto and Mitchell families are great families of faith and charity and do it with a quiet dignity,” said Immediate Past Grand Knight George Ribellino, Jr.

Among the awards were also a few tributes that brought smiles and tears. The Council Appreciation Award was given to Past Faithful Navigator Ed McGettigan, who passed away suddenly on July 6. To honor his memory, Past Grand Knight George Ribellino presented the award to Ed’s wife Cathy, and from here on out the award will be named in Ed’s name going forward.

“It was truly an honor to recognize those who make a difference in our parish and community.  The 2015-2016 fraternal year was my last year as Grand Knight and I always said one of my biggest joys as Grand Knight was awarding those who help make an impact on our parish and community,” said Ribellino.  Ed McGettigan was a member of the council since 2009 and helped start the council’s scholarship fund and sponsored many fundraising events.  Ribellino went on to say, “Brother Ed helped give us the tools to plant seeds that will continue to grow for years to come.”

In addition, Grand Knight Scott Criscuolo honored council supporter and St. Matthew parishioner Joan Scribner, who passed away on October 9. Criscuolo wore the official maroon winter jacket that St. Matthew ushers wore at the dinner, of which both Criscuolo and Scribner were ushers. “She saved me when I was asked to be lead usher for Christmas Eve 4pm mass in 2010”, Criscuolo recalled. “I was a ball of nerves and Joan came and relaxed me. That’s how she was, full of confidence and faith.”

The council started to award members of the council with yearly awards back in 2012.  It has become a council tradition.  “It was a wonderful night to honor those who rolled up their sleeves and did good work for St. Matthew and for our community”, said Grand Knight Scott Criscuolo, who won Knight of the Year in 2014.

Lastly, the council raised around $2,000 for the council charitable fund, which will help St. Matthew parish, Al’s Angels, Homes for the Brave, Malta House, All Saints Catholic School and Notre Dame Convalescent Home.  Also, around 500 pounds of food was collected for the St. Matthew food pantry from the guests attending the dinner.  Any guest who brought a bag of food was entered into a door prize raffle to win an Italian-themed basket made and donated by Brother Joe Giandurco’s wife Alice.

The goal of the Knights of Columbus Council at Saint Matthew Church in Norwalk is to perform acts of charity. Providing those in need with a range of support from financial to tactical help in dealing with a wide variety of challenges, the council members work together to foster the founding principles of their order: charity, unity, fraternity and patriotism.